RSS
← A Timely Missive…
From a Window… →

The Spy at Night… 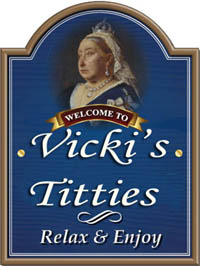 As you appear to be ignoring my messages, I have taken it upon myself to investigate the matter I brought to your attention the other day. Since our old pal Bill Sikes is unwilling to inveigle himself any further in the affair, I sent a telegram to ‘Vicki’s Titties’ (a public house of dubious repute) arranging to meet with Mr Hannay and attempt some sort of intervention.

When I arrived at the aforementioned hostelry last evening, I alighted from my Hansom in a flurry of excitement. I hasten to say the excitement was not of my doing, but created by a group of young apprentices in the midst of a series of strange tasks: some bigwig by the name of Lord Shagger had demanded they ascertain the cost of performing an appendectomy on the cheap, and to this end they pinned me to the wall and fired a barrage of questions regarding surgical cuts etc. I brandished my Doctor’s bag and swung it to and fro til they spotted the old fiend Dr Knox across the road (still on the run in regard to that body-snatching phase of his).

As the yobs turned to chase after Knoxie, I scurried into the public house and located the landlord. He glanced around nervously and bade me make haste to an upstairs room where I found our client, Richard Hannay.

“Where’s Sherlock Holmes?” said he, with what I deduced to be a rather unhelpful degree of resentment.

I explained that Mr Holmes was engaged on another matter, but that I would do all I could to help. At this, he crumpled in a heap on the fireside rug and began to sob loudly. Feeling somewhat embarrassed at this show of unmanliness, I determined to explore my feminine side and knelt down beside him. Slipping an arm around his shoulder I must admit I found the experience of human contact rather comforting (as you know, Mrs Watson has been somewhat distant lately, following her fling with that Italian ice cream seller).

It transpires that Hannay cannot return to his own flat as one of his admirers is tormenting him with threats of libel etc. (I use this term loosely, since his melodramatic plots are nothing more than completely ridiculous and unlikely to provoke anything other than utter boredom). However, I persuaded him that it was foolish to stay away from his own home and that we should go there at once and face whoever (or whatever) awaits us.

In the end, I only managed to convince him to take my advice after showing him my trusty weapon. His eyes lit up on seeing it, and he begged me to let him touch it. I agreed to this, since I didn’t see any harm in letting him feel its solid shaft and hair trigger, so long as the damn thing didn’t go off in his hand!

Thus empowered, he became considerably animated and minutes later, we hailed a cab and set off for his apartment. Had I known what lurked in the shadows of that deadly spot, I might have taken more notice of Hannay’s concerns.

Posted by colingarrow on January 17, 2016 in Detective Fiction

One response to “The Spy at Night…”