Some Murders are Announced…

By Carrier Pigeon to Inspector Lestrade 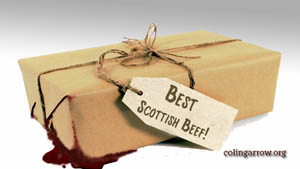 I am writing to advise you of the current situation vis a vis Messrs Sherlock Holmes and Doctor John (Big Boy) Watson. If you have been exercising your underemployed observational skills recently, you may be aware that the aforementioned pair evaded your constables and boarded a train to Edinburgh, and further, that the well-known novelist and misanthrope Richard (mine’s a pint) Hannay had engaged them in a bid to solve a mystery pertaining to yet another of his lacklustre tales of woe, ‘The Thirty-Nine Steps’.

I am at this moment entertaining this trio of tiresome tricksters at one of my lodging houses near the Anatomical Museum – an unintentional, but rather fitting geographical location, considering the procedures I have in mind for the three unfortunates.

Naturally, I wouldn’t as a rule choose to enlighten ‘The Fuzz’ regarding my preparations for what I imagine you would term ‘a triple murder’, but my enjoyment of a good brawl has thus far remained unfulfilled (Holmes in particular is being somewhat droll in his attempts at retaliation, and Watson is a useless twat at the best of times). I should be obliged, therefore, if you would be good enough to hop on the next train. We could meet for a drink in a quaint little hostelry just off Fleshmarket Close known as The Stab Inn, where I shall take pleasure in availing you of my plans. This will allow you, should you so wish, to attempt a rescue, and that in turn, will add (I hope) the necessary modicum of excitement to the proceedings to make it worth my while.

Should you not wish to attend, I shall be happy to post the various body parts back to Baker Street for the delectation of that slattern Mrs Hudson, labelled, of course, as ‘Finest Scottish Beef’. It would tickle me to imagine the silly cow stuffing her favourite detective into one of her ghastly pies.

I look forward to seeing you later,

Posted by colingarrow on February 27, 2016 in Detective Fiction

One response to “Some Murders are Announced…”