RSS
← A Word From Our Sponsor…
The Liebster Award → 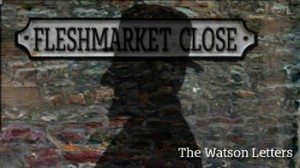 From the Journal of Inspector G Lestrade

On arrival at Waverley Railway Station, Edinburgh, shortly after 6:34pm, I checked my map and proceeded in a northerly direction with the intention of locating and observing the premises of a public house by the name of the Stabb Inn.

As I was about to turn into Princess Street, Constable Painter caught up with me (I’d given him leave to evacuate his bowels after alighting from the train).

“Sir,” said he. “I think you might find this of interest.” And waving a geographical diagram drawn on the back of an envelope, he pointed to an area of the City that I quickly discerned was located in a contradictory bearing to the one in which I had, up until that very moment, been travelling.

“I was accosted by a suspicious-looking fellow on the platform,” he continued. “And after questioning him, he gave me these directions.” Painter smiled at me the way young constables always do when they think they may have ‘got one over’ on a superior officer.

“You dickhead, Painter, we’re in Scotland now. Don’t you realize fellows like that see you coming? They say to themselves – Ah, there’s a stupid wee mannie in a silly hat that disnae ken where he’s going. I’ll knock oot a quick sketch in return for a penny or two. No wonder the country’s in such a state!”

Constable Painter gave me a blank look. “No Sir, what I meant was I think he may have been one of Moriarty’s men.” He waved the drawing in my face again. “And look…” He pointed to an area that appeared to lie in an upwardly direction from the Railway Station.

I snatched the thing from him and peered at the area in question. To my surprise, a narrow lane near Fleshmarket Close was marked with a cross and the following words: ‘Moriarty’s Favourite Pub’.

“What? No, of course not – the man is obviously one of Scotland’s many honest souls who happily came to the aid of the British Police. This is exactly what we want, Painter. Really man, you ought to be more trusting.” And with that I set off for the Stabb Inn with renewed vigour.

On approaching the aforementioned hostelry, I spied a darkly-cloaked figure removing himself from what appeared to be the rear entrance to the public house. Knowing the Evil Genius Moriarty as I do, I recognized at once the swaggering walk, the hunched shoulders and the faintly Eastern-European accent he tries so hard to disguise. As we watched, he hurried off, apparently speaking into a tube attached to his trousers.

“Quickly, Constable,” I whispered. “Follow that Evil Genius.” And we padded up the darkening lane after him…

Posted by colingarrow on March 23, 2016 in Detective Fiction

← A Word From Our Sponsor…
The Liebster Award →