Time For Your Close-up Mr Holmes… 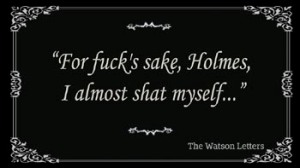 From the Journal of Inspector G Lestrade

Proceeding in a southerly direction (or easterly if my constable is to be believed) we hurried up the alley after the figure I suspected to be the Evil Genius Professor Moriarty. Ahead of us, the dark shape seemed almost to merge into the shadows and I feared we might lose him, but then he stumbled, giving away his position. A moment later, I saw the shadowy shape dart down a dark alley.

I pushed him in front of me and followed his echoing footsteps towards a dim light in the distance. Then, about halfway along the passage, a hand reached out of the darkness and grabbed my lapel, halting me in my tracks.

“Shut up, you fool.” A Swan Vesta sparked into life, illuminating the face of Sherlock Holmes.

“For fuck’s sake, Holmes, I almost shat myself. What the devil d’you mean by…”

In an instant (or a couple of instants), his hand was over my mouth, muffling my words.

“Hush Lestrade, lest you endanger the life of my companion further.”

He slapped my face. “That’s my line. Now, listen carefully. I believe we are involved in the making of what is commonly termed a moving picture and…”

“Really? How exciting. Will Errol Flynn be in it?”

Holmes slapped me again. “Moriarty is attempting to bring to an end the life of this country’s most significant inhabitant, and…”

“Me, you dolt. He means to film the whole thing in MoriartyVision and…”

The great detective snarled and I sensed he was becoming a little irritated. “It’s like VistaVision but with more cunning. Listen, Watson will by now have intercepted the film’s director and with any luck my canny comrade will have assessed the situation and be, even as we speak, positively throbbing with the excitement of what he is about to do in order to execute the necessary actions and avert my death.”

I shook my head. “Not at all, I just know that when this nasty business is all over, he’ll be sitting at home writing up his notes in preparation for one of his famous articles, and I can imagine the utter drivel he’ll conjure up to place in our mouths. You know what he’s like, Holmes, he’ll make us look complete fools.”

Holmes shook his head. “No, Lestrade, he’ll make you look a complete fool. Quickly now.” And he began to sprint down the passageway towards the sound of shouts, screams and several other unearthly noises…

Posted by colingarrow on April 5, 2016 in Detective Fiction