RSS
← In the Manner of an Evil Genius…
The Cutting Table… → 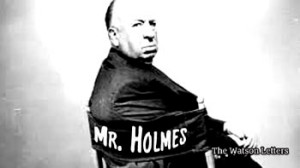 As I sit here in front of a warm fire, a mug of Cocoa on the arm of my favourite chair, my dear wife rubbing my poor feet in that special way of hers, I can only thank God that this nasty business is all over. In detailing this final account of the adventure I’m calling ‘Not the Thirty-Nine Steps’, I’m indebted both to Inspector Lestrade and (somewhat unusually), to the Evil Genius Professor Moriarty, who sent me his own account of events (no doubt in the hope that I might paint him in a more favourable light than I might otherwise be inclined).

Lestrade’s contribution was, I felt, a little begrudging – as he handed over his notes, I detected a hint of cynicism. He muttered a half-hearted ‘For the record’ then cajoled his features into what he likes to think of as a smile. I was unsurprised, therefore, to read a footnote in one of his entries commenting on the ‘utter drivel Watson will conjure up’ in place of actual conversation. Well, he can just bugger off if he thinks I shall write anything but the truth – drivel or otherwise!

As I stared up into the face of the silent movie director and impresario Alfred (Tch!) Hitchcock, I noticed another familiar visage at his shoulder.

But Hitchcock was quick to silence me with a finger to his bulbous lips. “Not a word, Doctor – we are filming!”

I struggled to my feet and couldn’t help the sarcastic quip that slipped out as I dusted myself down. “Would’ve thought it’d be rather superfluous in a silent movie…”

The little fat man slapped me so suddenly and so vehemently that it was all I could do not to scream like a girl.

“Cut!” There was a general murmur of disapproval in the background and Hitchcock turned back to me. “This is the age of sound, Doctor, so be a good chap and shut the fuck up during filming.” He smiled genially and with a hand on Hannay’s elbow, urged the other man to step forward. “And as it happens, you are mistaken about our friend here.”

“Ah, sorry old bean,” said the man who apparently wasn’t Hannay. He gave me what was obviously a practised wry smile and added, “Buchan’s the name, Johnny to my pals.”

“Ah,” said I. “I see.” I shrugged as nonchalantly as I was able and offered him my own wry smile. “So you’re not in league with Moriarty after all?”

Buchan laughed quietly. “On the contrary, Doctor Watson, we’re all in league with Moriarty.” He glanced at Hitchcock and the fat man winked conspiratorially. “Shall we re-set, Hitch?”

“Better tie them up first,” said an all-too-familiar voice behind me. I felt a sliver of ice slip down my spine as I turned to see Holmes and Lestrade pushed roughly to the ground. Professor Moriarty strode through the ripped scenery, brandishing a large pistol. “The final scene approaches, I think.”

I helped Holmes and Lestrade to their feet and the three of us stood in the centre of what was now a large circle of sour-faced villains.

“You’ll never get away with this, you know,” muttered Holmes, straightening his tie.

“Oh, I think we will,” said Moriarty. “You’re to star in an extraordinarily ingenious scene involving a circular saw and several large skewers. I’ve also commissioned a new musical score by Herman Herrmann with lots of ‘Eee! Eee! sounds. It’ll be a hit at the box office – especially when I reveal how a terrible accident resulted in the death of that stupid detective Sherlock Holmes. The punters love a good murder, you know.” He signalled for his men to bind our wrists while he, Buchan and Hitchcock huddled together.

“I say, Holmes,” I whispered. “I’m awfully sorry about this.”

I put on a brave face, but couldn’t help wonder if Holmes might be talking bollocks…

Posted by colingarrow on April 16, 2016 in Detective Fiction

← In the Manner of an Evil Genius…
The Cutting Table… →

3 responses to “The Director’s Cut…”