RSS
← In the Mooood for Murder…
Holmes, Holmes on the Train… →

Lying in the Arms of Mary… 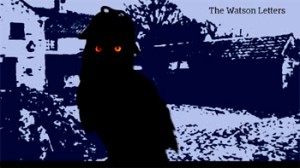 It was while I was snuggled up with my dear wife on our last night at Cold Comfort, that I began to run over the events of the previous few days. I tried to recall the details of my arrival, my early suspicions and of course – the murders. It was then that I remembered Henri.

Detaching myself from my good lady, I slid off the straw mattress and rooted around in my rucksack. Even in the semi-darkness, it was not difficult to guess what the cold, feathery mess was in the side pocket of the bag – the poor creature must have got himself tangled in my spare long-johns and simply passed away. (Although I realised later it was probably because I forgot to feed him).

Call it soppy sentimentalism, but I felt a tear in my eye as I knelt by the window in the half-light and cradled yet another dead body in my hands. Christ knows what I would tell Holmes – he was devoted to that bird, and the Baker Street Pigeon-Fanciers and Whippet Snatchers Club won’t be happy either.

Gazing down at the empty farmyard, I noticed Judith Starkadder crossing to the house, a bottle of scotch in one hand and Seth in the other. She glanced in my direction for a moment and waved the bottle at me. Whether this was in gratitude at the way we had foiled Flora’s murderous plans, or acknowledgement that the family fortune could (for a while, at least) remain intact, I cannot say. She disappeared into the house and (romantic soul that I am), I imagined I could hear a sense of normality descending on the farm once again.

I turned to look at Mary and wondered if she was still pissed off at Holmes for solving the mystery. Given that she had brought to light facts about the knives which I myself had missed, prompted me to wonder how my dear wife might have utilised her deductive skills in catching the killer if Holmes had not turned up. Watching her sleeping form, I determined to involve her in whatever mystery we might be called upon to tackle next.

Fumbling around in my shoe, I found my pocket watch and checked the time: it was 2AM. Sherlock would be back in Londen by now, having departed in the paddy wagon with Lestrade and the prisoner. I yawned and was about to crawl back into bed, when a sound not unlike the fluttering of wings came to my ears.

Sitting on the windowsill was a bird wearing a miniature deerstalker. For a moment, I thought perhaps Henri had come back to life, but the size of the creature quickly discharged such thoughts. I pulled the window open and allowed the owl to hop onto my arm. Attached to its leg was a message:

I smiled. We had another case.

Posted by colingarrow on June 30, 2016 in Detective Fiction

← In the Mooood for Murder…
Holmes, Holmes on the Train… →