RSS
← Lying in the Arms of Mary…
Romanian Holiday… →

Holmes, Holmes on the Train… 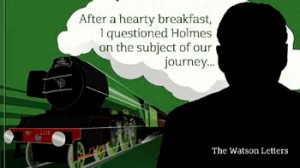 By the time my wife and I reached Londen King’s Cross, it was 8:45AM and the throngs of travellers milling around the entrance like so many sardines, made finding our way to the platform a tad difficult. Pushing through the hordes of fellow passengers, I gripped our bags in one hand while clutching Mary’s hand with the other – dragging her through the multitudes as quickly as I was able. My dear wife teetered along behind, holding onto her hat. She was already a little fractious due to being woken up in the early hours of the morning, but the promise of breakfast on the train had so far tempered any of her customary sarcastic remarks.

I spied Holmes on the platform, his fingers drumming an impatient tattoo on his favourite buffalo skin Louis Vuitton travelling chest. Catching sight of me through the crowd, I discerned the beginnings of a smile, but this quickly vanished when his eagle eye fell on my good lady.

“There you are, Watson, and about time too,” said he, shaking my hand vigorously. Then pulling me to one side, he whispered in my ear, “Why in God’s name did you bring her with you?”

I glanced at my wife but thankfully, she was engaged in persuading an urchin to part with his bacon sandwich. “Well, Holmes,” I began, “You did say to ‘bring Mary’, in your message, didn’t you?”

Holmes rolled his eyes. “The bird, Watson, the bird.”

I must have looked confused, for he continued:

This sort of abstruse rationalization was typical of Holmes and it was all I could do to contain my irritation. “For fuck’s sake, how was I supposed to know that? And why on earth would anyone name an owl ‘Mary’?”

He sniffed. “Elementary, Watson – the creature is prompt, yet pernickety. She is able to clean herself, fetch the newspaper and clean my toenails without recourse to biting. Furthermore, when given a specific task to perform such as the delivery of a message, she invariably works out the fastest route in order to arrive at her destination on time – a mission which you, friend Watson, seem barely capable of. Therefore, I named her after the one person I know who is proficient in such ritualistic and comparable situations: Mary.”

“None of which,” he went on, “endears her to me. Your wife, that is, not the bird.” He clicked his slender fingers at a porter and signalled for the man to pick up the chest. “I presume you left the owl at Cold Comfort Farm?”

He scowled. “Tch. I’d use Henri, but the damn creature’s disappeared. Probably went back to France by mistake…” I dropped my gaze and played with my coat buttons, lest he suspect my involvement. But Holmes was already looking to see where the porter had gone. “One minute, my good man.” Turning back to me, he said “By the by, Watson – you’ll need to arrange a ticket for your wife when we’re boarded. And be quick about it – I’ve heard fare-dodgers get tossed off at Clapham Junction.” And with that he strode away towards our carriage.

Needless to say, I mentioned none of this to Mary, and instead busied myself getting our luggage onto the train, acquiring the necessary travel documents and finding our compartment. Holmes was already ensconced in the corner seat, his beak-like nose buried in the latest copy of ‘Opium Eater’s Monthly’.

“This is nice,” said Mary, casting her eyes around the quiet opulence of the carriage. “Want a bite, Johnny?” I shook my head and she stuffed the remains of the bacon sandwich into her mouth. Giving me a hamster-like smile, she sat down and beamed at Holmes, no doubt still relishing in the glow of his apparent desire to have her along on the investigation. I thought it best to keep my companion’s irritation to myself.

After a hearty breakfast, I questioned Holmes on the subject of our journey.

“Ah-ha,” said he, apparently in a better frame of mind now he’d had his porridge. “It concerns a certain Count.”

Holmes gave her a sardonic smile. “Whether he be rich or no, madam, he has a problem and wishes myself and your husband…” he coughed. “And yourself, to investigate.”

Mary sat forward and patted my companion’s knee. “This isn’t anything to do with that Dracula bloke you got involved with a few years ago, is it, Sherl?”

Holmes winced at my wife’s familiarly, but quickly regained his composure. “I hardly think so, Mary – it’s a completely different name. And in any case, if was the author we got involved with, not his stupid creation.” He unfolded a map of Romania and spread it out between us. “Here – that’s where we’re headed…” His finger indicated a small village near the Borgo Pass. “We’ll stay a night there before going on to the castle.”

Mary clapped her hands together. “A castle? Hoorah!”

Holmes peered at her. “This is no holiday, Mrs Watson. I fear we may find ourselves in peril if we do not take the greatest of care.”

“The Count has received a series of death-threats.”

He nodded solemnly. “Apparently the villagers think he’s involved in a series of gruesome deaths – much like the ridiculous legend pertaining to the original owner of the castle.”

“Really?” I glanced at Mary. “And who was the original owner?”

“Why, Count Dracula of course.”

Mary made a slight grunting noise. “But you just said…”

Holmes held up a hand. “No, Mary. I know what you’re thinking but it is mere conscience. Dracula is a fictional character, nothing more. His name was attached to the deeds of the castle some years ago in a bid to attract tourists.” He sniffed and picked up his magazine again.

“But Holmes,” I tried, “What if there’s something in it? What if Dracula is real?”

“Don’t be an idiot, Watson – Count Alucard is British. Until recently, he was living in Londen. Place called Carfax, I believe.”

“But me no buts, Watson. Coincidence is no basis for murder. Which is precisely why you and I…” He glanced at Mary. “And your dear wife, have been called in to investigate.”

Holmes turned to one side and lifted his periodical so we couldn’t distract him. I looked at Mary and shrugged. She mouthed ‘He’s fucking joking?’ I mouthed back ‘I don’t think so, dearest.’

And not another word was uttered until we reached Harwich.

Posted by colingarrow on July 4, 2016 in Detective Fiction

← Lying in the Arms of Mary…
Romanian Holiday… →