RSS
← A Minstrel in the Gallery…
Flying Tonight… →

A Rush of Blood… 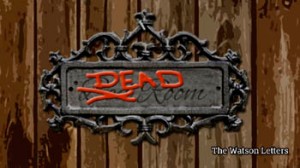 As I took in the sight before us, I realised that a supreme effort would be required in order to drag my eyes away from the bizarre scene. Holmes , naturally, was the first to leap into action (he always is where supreme efforts are concerned), and grabbing me by the lapels, he slapped me seventeen times across the face.

“Quickly Watson, there’s no time to lose.” And pausing only for a short while to light his Meerschaum, he bade me follow him through the trapdoor he had discovered while examining the floorboards only minutes before. As the hatch slammed shut behind us, I couldn’t help wonder if Holmes knew what the fuck he was doing.

“Language, Watson!” he barked over his shoulder.

“I didn’t say a word,” I spluttered indignantly.

“Ah, but I’ll wager you were thinking it.” He reached the bottom of the steps and lit a candle. “We must find Mary before something even more terrible than the most terrible murder you can imagine happens to her.”

“What? More terrible than Jack the Ripper?”

He gripped my arm and looked me in the eye. “Prepare yourself for the most evil of evils, old friend. This case may prove to be our final problem.”

“I bloody hope not – I’ve just put a deposit down on a holiday cottage in the Cotswolds.”

Ducking down to avoid the low beams, we hurried down a passageway to a door at the end. In the dim light, I could see a sign that read ‘Bed Room’, except with ‘Bed’ crossed out and ‘Dead’ written in blood above it.

The door squealed as Holmes pushed it open, revealing a dank cellar with moss growing up the walls and water dripping from the high vaulted ceiling. Even in the gloom, I could see the three coffins propped up on trestles. Holmes moved forward, holding the candle in front.

“It’s as I feared, Watson,” he said, moving from one box to another. “They’re all empty.”

“But what does it mean, Holmes?” I waved my arms helplessly. “Who are they for?”

“The butler?” I ventured.

He shook his head. “If only it were so, Watson. The ‘butler’ as you call him is none other than the Count himself. How else could the fellow come and go so easily? No, the other one is for a person not yet identified.” He peered at the empty coffins. “What time is it?”

I checked my Half Hunter. “Almost one.”

He nodded slowly. “Then he still has several hours before dawn. If he has achieved his despicable intentions, we must find your wife before she wakes and give her a blood transfusion.”

“But shouldn’t we wait here and stake him through the heart when he comes back?”

Holmes turned and gave me that sardonic smile of his. “Firstly, Watson, the stakes and mallet are upstairs in your bedroom, but more importantly, do you seriously imagine Dracula is going to stand still and allow us to bang a piece of wood through his black heart?”

“Oh, I suppose not, now you come to mention it.”

Back upstairs, we made haste to my bedroom. What we found there, however, was not what we’d expected: my dear Mary lay in bed, fast asleep, a smile of pure contentment across her pale face.

“My God.” I ran to her side and got to work with my fingers.

Holmes slapped me across the head. “There’s no time for that sort of thing, Watson, examine her neck – quickly, now!”

“I was feeling for a pulse actually, but you’re right. Look here – two red marks on her neck. There’s no time to lose, Holmes. We must give her a transfusion now.”

The great detective coughed. “Right. I’ll leave you to it.” And with that he made for the door.

“Of course, but that’s not what I meant. I need your blood.” I took his arm and began to roll up his sleeve.

“My blood? What on earth for? What’s wrong with yours?” I discerned the beginnings of a tremor in my companion’s voice. “It’s all the same stuff, isn’t it?”

I snorted. “You know damn well it’s not, Holmes. I can’t give her mine, can I  – I’m O positive. Mary’s AB negative, same as you.” I led him over to the chair beside the bed. “You’re going to save my wife’s life Holmes. Like it or not.” I allowed myself a gentle chuckle as I gathered the equipment I needed for the process.

Using two rubberised hot water bottles, a length of tubing from my personal colonic irrigation kit and a set of good sharp needles from my old army field apparatus, I hooked up my companion and watched his blood flow.

Half an hour later, I handed Holmes a cup of tea and a couple of Custard Creams from my private supply. “There you are, old chap. Wasn’t so bad, was it?”

He sniffed and chomped on a biscuit. “Suppose not.” He glanced at Mary. “How is she?”

I leaned over and turned her face to the light. As I did so, I noticed the two red marks appeared to have smudged. Licking my handkerchief, I rubbed a portion of my wife’s neck and to my surprise, the marks came off. “Well, there’s a turn-up for the books, Holmes. Looks like it was only lipstick.”

“What? You’re fu – ” he began, but at that moment, Mary’s eyes flickered open.

I patted her head. “Of course, my love.” I surreptitiously pushed the rubber tubing under the mattress out of sight. “We thought the Count had bitten you, that’s all.”

Mary sat up and rubbed her eyes. “No,” she said with a wistful sigh. “Apparently the crucifix around my neck put him off slightly.”

“Yes, we were just wondering,” he said, giving me a fierce look. “Just wondering how you got two red marks on your neck.”

Mary’s hand went involuntarily to the place where the spots had been. “Oh, those.” She nodded. “Dracula was a little miffed at not being able to gobble my blood so I used my lipstick to make it look as if he had. It seemed to cheer him up.”

“I see.” Holmes turned to me. “Just as well we didn’t go to all the trouble of giving her a blood transfusion then, isn’t it, Johnnie?” He scowled rather more than I thought appropriate for a detective of his standing.

“I don’t suppose you know where he is now?” I said.

She yawned. “I think he said he was flying to Londen tonight. Said he’d some business with a man called…” She yawned again. “Lestat?”

I looked at Holmes and we both came to the same conclusion – Lestrade!

Posted by colingarrow on July 12, 2016 in Detective Fiction

← A Minstrel in the Gallery…
Flying Tonight… →