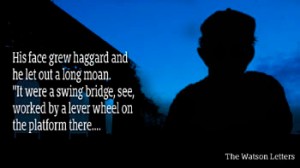 The stationmaster paused and stared at his expectant audience.

“What a load of nonsense,” muttered Mary. “I’m going to see if there’s a kitchen.” And she scuttled off through the door at the other side of the waiting room.

The stationmaster made a grumbling noise. “Ain’t be nothin’ through there but the old line.”

Mary reappeared and closed the door. “There’s another track at that side – does it go anywhere?”

The old man shook his head. “Don’t go nowhere, that don’t,” he said.

But Mary was not to be outdone. “Don’t be ridiculous. It must go somewhere.” She looked to me for support.

“Well, yes of course it must,” I said. Then a dawning realisation swept over me and I stared hard at the stationmaster. “Look here old man, has that line got something to do with this ghost train story of yours?”

But he just shook his head. “Noooooo…I cannot be responsible fer the tellin’ of a terrible tale when there’s ladies present.”

“That’s no lady – that’s his wife!” chirruped Arthur, adding “Boom, boom,” in case anyone hadn’t realised it was a joke. The young couple laughed nervously – the only sound they’d made so far.

“Very well,” said the stationmaster. “On yer own ‘eads it be.”

He pulled up a chair at the table and we all gathered round. I have to admit I felt a shiver travel up and down my spine. Recalling the Great Detective’s approach to hearing accounts of ghostly goings-on and the like, I endeavoured to replicate his solid, unyielding countenance in my own face. Clearly, I didn’t quite pull this off, for Mary kicked me under the table and told me to stop pulling faces.

“It were thirty year ago to this very night. Stationmaster in those days were a feller called Ted Holmes.”

The old man glared at me, then turned his attention to Mary.

“That other line you arsked about – it used ter run down to the old port, over the bridge.” His face grew haggard and he let out a long moan. “It were a swing bridge, see, worked by a lever wheel on the platform there. That wheel, it were always left open apart from when a train were comin’ through. But that night at eleven o’clock when Ted Holmes went to open the bridge, he took ill and collapsed.”

“Oh, he be dead alright, but that didn’t stop the train, did it? No,” he muttered, answering his own question. “On it came, thunderin’ through the station, whistle blowin, steamin’ and screamin’ into the tunnel and straight through the open bridge into the river…” Throwing his hands up in the air, he let out a blood-curdling cry: “Arrghhhhhh!”

“Nay,” said the stationmaster, dabbing his nether regions. “That were me just now. Pissed my pants.”

“I think that’s enough excitement for one night,” said I taking the old man’s arm. “Now if you’ll just toddle along, we’ll make ourselves comfortable.” I ushered him towards the door but he turned sharply and leaned down towards me, his nose almost touching my own.

“Yes, yes,” I said, pushing him through the door and closing it firmly. “Right then, I suggest we all try to get some shut-eye.” I smiled as hopefully as I was able, but I had a nasty feeling we wouldn’t be getting a lot of sleep…

Posted by colingarrow on August 6, 2016 in Detective Fiction

← The Warning…
The Train Now Arriving… →

2 responses to “A Ghostly Tale…”