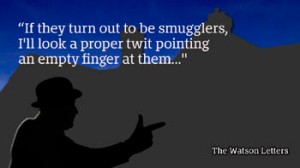 As the train thundered off into the darkness, I glanced at my companions. “Well, if that was a ghost train, I’m a Dutchman.”

I stepped forward and gave him a swift smack across the face. “Any more noise from you and you’ll get a shot of morphine.” The man stuck his tongue out at me, but lay back down and didn’t utter another word. “Now,” I continued, looking round at the others. “There’s no such thing as ghosts, so I suggest – ”

“But me no buts,” I said, allowing myself a coy smile at my Holmes-like riposte. “There’s a simple explanation for this or I’m a Dutchman.”

“Mary nudged me in the ribs. “You’ve said that already.”

“I expect you were going to suggest we go and have a look at the tracks, weren’t you? After all, if it really was a ghost train, it wouldn’t require actual rails, would it?”

I nodded. “That’s it exactly, darling. Come along.” I beckoned to the Twins, the young couple and the man with the Mac. “I think we should all go.” I glared at the stationmaster, challenging him to move, but he stayed put.

Out on the platform, I was glad to see the rain had finally stopped. I led my companions to where the winding wheel stood. Naturally, it had not moved and was still firmly chained up in the ‘closed’ position.

“There you are, you see – the bridge is shut, so whatever it was that came through here just now would’ve been able to continue on to wherever the line goes to.”

“And where does it go – to the foot of our stairs?” It was the young woman who spoke this time. There was something familiar about her words, but before I had time to think about it, Arthur grabbed my arm.

“Don’t know about you, mate, but I reckon we should find out where that train went.” He leaned towards me and added, “Before the bloody thing comes back.”

I sniffed and nodded. “That’s exactly what I was going to suggest, actually.” I looked at my companions – the old man in the Mac was standing by the door, his body language making it quite clear he did not want to be involved. The young couple too, were clearly too scared to be of much use. “Very well.” I pointed to Mary, Arthur and Dickie. “We four will take a gander along the line. You three stay here and keep an eye on the stationmaster.” I paused. “And if the train should come back, I suggest you all have a good look at it.”

Arthur and Dickie jumped down and set off along the tracks in the direction of the train. I helped Mary climb down, then knelt by the rails and ran a finger along the cold steel. The surface of the rail was shiny, and even glittered in the moonlight – this track was obviously in regular use, but by what?

Standing, I looked down the line towards the bridge. “Is it my imagination, Mary, or are there lights along there?”

My wife peered down the track. “You know, I believe you’re right.” She looked up at me. “Smugglers?”

I nodded. “That would be the obvious explanation.” Reaching into my jacket, I reassured myself my trusty revolver was primed and ready.

Mary patted my chest and frowned. “Johnny – why on earth did you bring your gun? We’re supposed to be on holiday.”

I sighed. “Holiday or no, if this does turn out to be smugglers, I’d look a proper twit pointing an empty finger at them.”

“I’ve never known you to have an empty finger.” She winked at me and started off down the track after the others.

Posted by colingarrow on August 17, 2016 in Detective Fiction

2 responses to “The Train Now Departing…”