RSS
← Trains of the Unexpected…
A Bridge Too Far… → 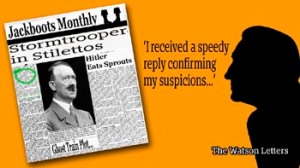 “Have to say, old bean,” I muttered as I ushered Holmes into the kitchen. “I’m a bit confused.”

My companion smiled sardonically. “I was a little confused myself, Watson, until a few hours ago, but tell me what you know, old friend.”

He closed the door and while I lit the gas and boiled the kettle again, I recounted our recent activities.

When I’d finished, he nodded grimly. “It is as I feared. Now, Watson, I see from your stupefied expression that you are wondering what brought me here?” He stuffed a batch of hard grimy shag into his Meerschaum, lit the stinking weed and puffed away intermittently as he talked. “When I received your message detailing your holiday plans, I determined to make the most of my leisure time. Since I had no outstanding cases, I embarked on that monograph I’ve been meaning to write concerning the distinctive hierarchy and societal customs inherent in the particular breed of bovine cowdungius we encountered at Cold Comfort Farm.”

He nodded. “I had previously ordered several cow-related periodicals in preparation for my research. However, as I flicked through them, I came across a magazine which I had definitely not requested. Jackboots Monthly is a journal which my dear brother Mycroft brought to my attention some months ago – he suspected there may be some need for my services vis-à-vis the usual world-domination mad-bastard type evil plot. However, nothing came of it. Until now…”

Mary popped her head round the door. “You two playing nicely? The natives are getting restless.”

“Thank you Mrs Watson. We shall be out directly.”

When Mary had closed the door, he continued. “I was about to put the filthy rag aside when I noticed something strange. Part of an article entitled Stormtrooper in Stilettos, on the subject of planning invasions, had been circled in green ink. A note scribbled in the margin read: Milford Junction, perhaps???”

“But Holmes!” I shrieked, “This is Milford Junction!”

“Really Watson, you have an unenviable talent for the fucking obvious. Yes, this is the aforementioned intersection, and having perused your letter I realised you and your dear wife would be in its vicinity and might well be in a position to comment on the situation.”

“But Holmes…” I said, filling the teapot.

“But me no buts, Watson, I know what you’re thinking, which is why my next action was to telegraph the station from which you departed this morning. I received a speedy reply confirming my suspicions.”

“Yes, old friend – your journey was deliberately interrupted by a person or persons unknown. And I suspect the intention was to ensure that you, a respected medical man, would observe a certain phenomenon.”

He nodded solemnly. “The very same. Someone requires an independent witness.”

“But what has that…”

“…Got to do with Nazis? No idea, but I took the liberty of borrowing one of Mycroft’s Steam-powered hydro-lifty-plane devices and arrived here in what I suspect is the nick of time.” He opened the door and looked out at our companions. “Show me the box.”

The great detective rubbed his chin. “Hmm. I wonder what time the next train’s due?”

“I’ll ask the stationmaster,” I said, heading back to the waiting room.

“No!” Holmes grabbed my arm. “He’ll no doubt tell us what he wants us to hear.”

“Of course.” He gave me a slightly pitying look. “You were brought here to observe, Watson. However, you and I shall be observing something very different. Tell me, were you standing on the platform when the train last went through?”

“And the train went that way, away from the bridge?”

“Right again, old bean. What are you getting at?”

“When it comes through here again, you and I are going to hitch a ride…”

Posted by colingarrow on September 8, 2016 in Detective Fiction

← Trains of the Unexpected…
A Bridge Too Far… →

6 responses to “Watching the Detective…”