RSS
← The Body in the Cellar…
Racked and Pinioned… →

Knife and Easy Does it… 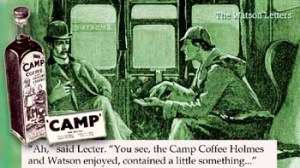 From the Diary of Doctor John Watson

In any other situation Holmes and myself would have leaped on the fiend and disabled him in an instant, but as Lecter raised his arms, we saw the massive choppers he held in each hand.

“Knife to see you, to see you knife,” he murmured.

I took a step back, the better to distance myself from the glinting blades, but Holmes did exactly the opposite: stepping forward, he held up his hands in a placatory gesture.

“Come come, Hannie, as a scholar of human behaviour, I’m certain this is not what you intended…”

Lecter laughed. “On the contrary Holmesy, it’s exactly what I intended.” He pointed one blade towards the trestle tables. “Doctor Watson, perhaps you and your wife would be good enough to assemble the tables?” He glanced at me. “I’m keen to prepare my next meal – kidney surprise.”

Sticking my chest out, I summoned my most manly voice. “I shall do nothing of the sort, you fiend!”

Now it was Mary’s turn to step forward. Adopting a hands-on-hips stance (which I knew from experience meant trouble), she addressed the flesh-hungry doctor. “I think you’re forgetting something, aren’t you? There are still four of us and only one of you. We shall have you tied up and helpless in a trice.” She snarled in that saucy way of hers, sending a shiver up my inner thigh.

“Ah, would that it were so,” said Lecter. “You see, the particular brand of Camp Coffee Messers Holmes and Watson enjoyed on the train, contained a little something that should be taking effect…” He pulled a rather handsome Half-Hunter from his waistcoat pocket, and gave a satisfied smile. “Just about now.”

Whether as a consequence of his suggestion or that there really had been something in our coffee, I began to feel decidedly odd. Glancing at Holmes, I perceived a trace of doubt edging across his masculine features. Perhaps it was true – we had been poisoned and at any moment we’d be the ones lying tied up and helpless while the evil brute carried out his depraved plan.

“It may have escaped your attention Doctor,” said Mary, waving a reproving finger, “but neither myself nor Lord Lambton have touched a drop of coffee, Camp or otherwise.”

Lecter grinned. “Quite so, my dear, however, I hardly think a mere woman is capable of standing in my way. If you read of my exploits in Bexhill-on-Sea, you’ll recall how I trashed that so-called investigator Clarice Starling. Poor girl’s singing a tune of quite a different sort now.”

“Then clearly she wasn’t a Grammar-school girl. If you come near me, I’ll kick you in the testicles.”

“Alas,” said the doctor, an expression of regret on his face. “I have no testicles – I ate them several years ago with some fava beans and a nice Chianti.”

Lecter flashed the old man a girlish grin. “As it happens, I have considered him…” And with that he swung his left hand downwards, embedding one of the knives in Lord Lambton’s leg.

I gave a little start, as did my companions, but Lambton simply stared at the knife and let out a faint sigh.

His attacker pulled the blade free and waved it at Mary. “Wooden legs – a consequence of the Boer War, if I recall. As they don’t say in the movies – he can hide, but he can’t run.”

By now, my vision had begun to blur and my head was spinning. I was further dismayed to see Holmes had already sunk to his knees. Gathering what little strength I had left, I directed my words at the notorious psychiatrist and part-time cannibal. “If you touch one hair of her head…”

But my words trailed away to nothing as darkness overcame me. The last sound I heard was my dear wife screaming…

Posted by colingarrow on May 13, 2017 in Detective Fiction

← The Body in the Cellar…
Racked and Pinioned… →