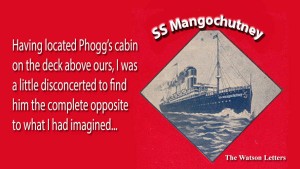 The following morning found me sitting by my fireside considering my next move. With Holmes still absent without leave, I had no sage companion to lean on (aside from Mary, who had already foisted her opinion upon me several times over breakfast that morning). In such circumstances, I called on my own expertise and began by running over the events of the previous day, focusing on four points:

1. Phileas Phogg and Passepartout would shortly leave our shores on what, even in normal
circumstances, could well prove to be a hazardous journey.
2. The Hooded Claw was clearly a dangerous individual, though as yet, I had no specific proof he intended to injure the aforementioned travellers.
3. Mister Claw, I deduced, may or may not interfere with said traveller’s arrangements in a manner that may or may not place all concerned in peril.
4. Mary wants a holiday.

Ruminating on the problem while chomping on one of my wife’s jammy doughnuts, I remained undecided, but as it turned out, my mind was made up via an external influence – a telegram:

SS Mangochutney about to sail. Cabin booked in your name. Please come at once.

Without Holmes to guide my thinking otherwise, I settled on viewing the initial part of the trip as a vacation, therefore, should the whole thing turn out to be either beyond my comprehension, or simply a waste of time, my wife and I would at least gain some quality time together. If I was wrong, then the combined deductive powers of myself and my dear wife, would surely keep us from harm.

Breaking the news to Mary, I was rewarded with a gleaming smile and a twinkle in her wonky eye, along with the promise that she’d make me ‘shoot my luggage’ (whatever that means), as soon as we were on board.

We made haste to the docks and collected the tickets left for us by Passepartout (though how he knew I’d be bringing Mary, was a little puzzling). Once on board the liner, we were directed to our cabin, which I was pleased to see was of the first-class variety.

“Isn’t this lovely,” gushed Mary, unpacking her French knickers. “And look – we’re invited to the Captain’s table for dinner!”

I glanced at the invitation. “Captain Smith? Humph. I hope he’s recovered from that disastrous affair involving the world’s largest iceberg.”

“Oh, nothing. Just an insurance cock-up by the White Star Line. It was all covered up by Sherlock’s brother.”

Mary’s face brightened visibly and she patted her chest. “Mycroft’s a proper gentleman and very manly, don’t you think, darling. He has such a lovely smile and an absolutely enormous –”

“Yes, yes, I get the picture, thank you. Now, we’d better make contact with Passepartout and that fairy-fancier Phileas Phogg.”

Having located Phogg’s cabin on the deck above ours, I was a little disconcerted to find him the complete opposite to what I had imagined. Passepartout opened the door and bade us enter, serving cocktails before I’d even taken off my hat.

“Now then, Doctor Watson, how’s tha’ goin’ on, then, eh?” A tall, bearded fellow stepped out of the adjoining room and shook my hand warmly. “Rate glad ter see thee, lad. I ‘ope t’cabin’s up ter standard, an’ that?”

My arm positively trembled as Phogg’s vice-like grip brought tears to my eyes. “Er, yes, yes, of course,” I managed, extricating myself from his fat fingers. “We’re most grateful.”

As I smiled back at him, I glanced over Phogg’s shoulder and caught sight of Mary and Passepartout in what can only be described as a ‘clinch’. The pair broke free then and coughed loudly. Mary had the good manners to blush, and I made a mental note to put her over my knee and give her a jolly good spanking when we got back to the cabin.

“Now, look ‘ere, Doctor,” said Phogg. “My manservant ‘ere ‘as warned you about that bugger the Hooded Claw, so I just wanted ter let yer know that we believe him to be on board, in one of the third-class compartments.”

“Small Catholic priest, aye, that’s right.” He caressed his beard thoughtfully. “Though of course, he’ll be changing his appearance every few days, if not sooner.”

“Per’aps not tonight, but Ah wouldn’t be at all surprised if the bugger tried to throw one of us overboard.” He wagged a finger at me. “So watch out, or ye might wake up dead.”

By the time we returned to our cabin to dress for dinner, I was as nervous as a new bride and looking forward to an evening with Captain ‘Titanic’ Smith, with as much enthusiasm as a lobster in a pot. Nevertheless, I was sure the ‘Claw’ would hold off on his mission until we’d all had a good night’s sleep.

Naturally, I was wrong.

Posted by colingarrow on October 8, 2017 in Detective Fiction