A Claw in the Hand 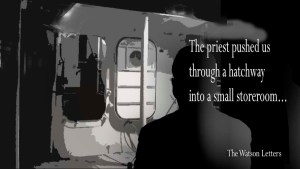 “What are you waiting for?” hissed our captor. “Get going.”

The villain merely laughed and nudged me with his pistol.

Having risen to his full height, I noticed the man’s black shoes had been strapped to his knees, leaving his stockinged feet on show. The fool must have been crawling around on his knees since boarding the ship in an effort to conceal his true stature and therefore, his identity. However, the ploy might still work in our favour – someone would be bound to notice the discrepancy: how many priests walk around with their shoes half-way up their legs?

Sadly, my hopes of intervention fell by the wayside as we were shoved roughly along the passage. The two ‘nuns’ pushed in close, hiding their leader’s lower extremities from view, and the gun in my side persuaded me any evasive action on my part would end in tragedy. Grasping Mary’s hand, I whispered to her to stay calm, though I could already feel a familiar loosening sensation in my bowels. Buggeration! As if it weren’t enough that we were about to be killed, but to be killed after kacking my breeches… Damn it all – it was more than an ordinary Englishman could bear. I had to do something.

It was only then that I remembered my trusty revolver. In their haste, the villains hadn’t searched us, perhaps thinking we were simply too stupid to consider arming ourselves. Well, they’d soon learn that John Watson MD was not to be trifled with. In one deft movement, I slid my hand into my pocket and whipped out my weapon. Unfortunately, my action was so quick I took myself by surprise and a second later the damn thing slipped out of my fingers and flew into the air.

The man in the priest’s outfit reacted startlingly fast – flinging out his hand, he grabbed the weapon and dropped it down his cassock as if it were the sort of manoeuvre he did on a daily basis.

“Now look here…” I started, “That’s mine…” but a fat fist smashed into my face, cutting off my objections and knocking me sideways.

Mary let out a yelp, but her protests were short-lived. The fist’s owner snarled and for the first time I realised that not only were the Claw’s side-kicks not women, but they weren’t even attractive. The brute snarled again and waved a knife in my face.

“Do that again, son, an’ I’ll slit your gizzards.”

I wasn’t sure what gizzards were, but the man’s intentions were clear. The priest smiled at me. I smiled back. Then, giving Mary’s hand a squeeze, we continued towards our fate.

The journey to the lower decks took some time, as we were forced to use those areas reserved for the crew, negotiating narrow doorways and stairways. All the while, at least one of us had a gun pressed to our sides, no doubt to ensure our continued cooperation. I surmised most of the passengers would still be at dinner, as we only passed three or four individuals on the way, and in any case they were all too engrossed in themselves to pay us any attention.

I began to wonder what Holmes would do. For the next few minutes I busied myself thinking of questions he would ask in this situation, but my befuddled brain refused to work and all I could come up with was a vague plan to somehow overpower the deadly trio and escape to the safety of the dining hall.

As we neared our destination, the noise of the ship’s engines grew louder and the air thick with steam and stale sweat. The priest pushed us through a hatchway into a small storeroom that I guessed from the metallic thumping must be adjacent to the engine room.

Stumbling into darkness, I was given a hard shove from behind and instinctively stuck out my hands. Something warm and wet came into contact with my fingers and I immediately shrank back, wiping my soiled digits down my shirt.

Mary yelped and fell against me, before a loud clang told us the door had been locked behind us. Rubbing a sleeve across my face, I blinked in the darkness. With a sudden flush of fear, I realised that someone or something was standing in front of me.

I heard a sharp rasping sound and a match sparked into life.

“Ah, Watson,” said a familiar voice. “About time you showed up.”

“Hold your enthusiasm, old friend,” said he, holding the match up so we could see his face. “This complication is not what I had intended.”

With a sudden flush of concern I saw that my friend’s face bore the marks of a fight – his nose was bloodied and a splash of red splattered his shirt. I was about to tender my sympathies when Mary butted in.

“Just a minute,” she said. “Why are you dressed as a waiter?”

Holmes gave her a sardonic smile. “My apologies, Mrs Watson, but when I was interviewed a few months ago for the periodical Amateur Detective Monthly, I referred to your husband as ‘my rather stupid friend.’ At the time I regretted making such a patronising remark as unworthy of me. However, I now see that my description of dear Johnny’s worth was quite accurate.” Turning to me, he added, “because he’s a total prick.”

“Perhaps,” he said, “but if you had correctly interpreted our earlier meeting in the lavatory, we would not now be in this situation.”

“But me no buts, Watson. Your lack of attention has allowed the Hooded Claw the opportunity to carry out the mission he came on board to do – to kill Phileas Phogg.”

And with that, the match went out and we were plunged once more into darkness.

Posted by colingarrow on November 26, 2017 in Detective Fiction

Is That a Gun in Your Pocket? 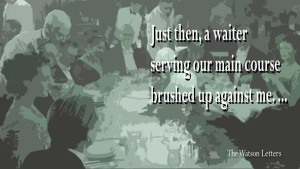 At dinner, Phogg and his companion took their seats a few tables to the left of myself and Mary, who found ourselves in the company of three other couples, all of whom were dressed up to the nines. Mary snuggled up to Captain Smith, tickling his snowy-white beard and regaling him with stories of her husband’s adventures with the infamous Sherlock Holmes.

Given my wife’s usual low opinion of Holmes, I was a little surprised to overhear her lauding the man’s exploits as if he were a bosom friend. Feeling somewhat put out at this show of disloyalty, I fell into conversation with the couple closest to me – an Australian chap named Dundee and his blonde beauty of a wife, who he referred to as Sheila, though I gathered from her glowering countenance, that this was not her actual name.

While Mr Dundee entertained me with an account of some run-in with a cross-eyed alligator, I made the effort to respond positively, nodding and uttering occasional remarks. My attention, however, was entirely taken by three individuals over the Aussie’s left shoulder. I had noticed them shortly after taking our seats and endeavoured to keep the trio of so-called religious aficionados in view ever since. The brace of nuns sat on either side of the small Catholic priest, who occasionally returned my gaze with a polite bow of the head and a sycophantic smile. If he was trying to intimidate me, it wasn’t working.

Just then, a waiter serving our main course brushed up against me. He apologised and leaned down so that his mouth was close to my ear.

“A message for you, Doctor Watson.”

The man’s voice was low and could not have been overheard by my companions. I turned towards him, suddenly alert. “Yes?”

And with that, the man was gone. I glanced at Mary who, as usual, had seen everything. Though still deep in conversation with the (clearly enthralled Captain Smith), she threw me a quick glance that told me she too, was on the alert.

A few moments later, I excused myself and strolled nonchalantly through the dining hall towards the cloakroom. On entering, I was relieved to note that apart from the waiter, I was alone. I coughed. “You have a message for me?”

The man approached and rested the palm of one hand on my chest. I looked down at his long, thin fingers, noting the clean fingernails and absence of a wedding ring. When I raised my eyes to his face, he smiled and slid his hand down my torso towards my nether regions.

“Now look here…” I started, casting his arm away. “What’s the meaning of this?”

The waiter pouted. “You want some, don’t you?” He patted my leg and rubbed his hand along the length of my weapon. “You can’t fool me…”

I sighed. “For fuck’s sake.” Reaching into my trouser pocket, I pulled out my revolver and stuck the barrel into his ear. The waiter yelped and fell to his knees.

“Gawd’s sake, I only wanted…” he whimpered.

“Yes, yes,” I muttered. “I can imagine what you wanted, but unfortunately for you, this is a gun, not an erection. Now fuck off before I lose my temper.”

He disappeared faster than a whippet up a drainpipe and I slipped the gun back into my pocket before taking the opportunity to relieve my bladder and wash my hands. When I emerged from the cloakroom, Mary was waiting for me.

“False alarm.” I took her arm and began to head back towards the dining hall, but Mary pulled me to one side.

“The priest has gone.”

She nodded. “They left shortly after you did.”

I rubbed my chin thoughtfully. “Better liaise with Phogg.”

Something prodded me in the buttocks. For a moment, I though the waiter had come back to try his luck, but a familiar voice persuaded me otherwise.

“Don’t turn around Doctor, or I shall have to blow your cheeks apart. Now, take your dear wife’s hand and make you way to the boiler room.”

Mary’s face had drained of colour, telling me all I needed to know.

“You won’t get away with this, you cad,” I said, hoping the villain wouldn’t notice the tremor in my voice.

“Au contraire,” he said, nudging me with his pistol. “I already have.”

As we started off down the passageway, I could only hope Phogg would grow suspicious at our absence and investigate. But as I was soon to discover, Phogg and his companion were only too aware of the situation…

Posted by colingarrow on November 5, 2017 in Detective Fiction