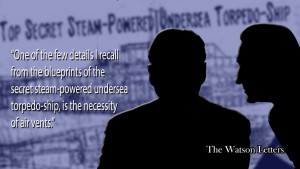 “For God’s sake, Holmes,” I said. “This is hardly the time for levity.”

“Indeed,” said my big-nosed companion. “For once, Watson, you are half right. In point of fact it was not levity, but levitation I had in mind.”

“Levi…” I began, but Holmes cut me off with a raised finger.

“This is not the time for antagonism, Johnny. As the Professor pointed out, we are shortly to be disposed of, so I would urge you to, as our Yorkshire friend here would say, ‘shut tha bloody trap, lad’, and allow me to expand on my strategy.”

Phogg chuckled and patted the great detective’s arm. “Eeh, that were a rate good impression o’ me, Mister ‘Olmes – I almost thought I were talkin to meself. D’you do anyone else?”

“I’m not one to boast, Phogg,” said Holmes, modestly, “but my rendition of ‘Throw Another Chair Leg on the Fire, Mother’ by Miss Pamela Ayres, is said to be uncanny in its authenticity. However, we must press on. Mary?”

Turning to my wife, I saw that my darling had slipped out of her evening gown and was now standing in front of us stark naked. Not having looked upon her unclothed form for some time, and in such unforgiving light, I was taken aback and, I’m ashamed to admit, the shock caused me to temporarily relax my bladder.

“Oh, Johnny,” murmured Mary, stepping towards me. Grasping my jacket, she fastened the buttons, thereby hiding the worst of my embarrassment. Then turning to Holmes, she gave him a mock salute. “I assume you do have some lubricant?”

“Of course,” said he, “I never leave Baker Street without a tube of Johnson’s Marital Emollient, but if I’m right, I think we may proceed without it. Look here…”

And with that, he dropped to the floor and rolled under one of the workbenches. I crouched down beside him and watched as he pulled at a section of mesh that ran along the length of one wall.

“Some sort of vent, eh, Holmes?” I said, prostrating myself on the ground next to him.

“One of the few details I recall from the blueprints of the secret steam-powered undersea torpedo-ship, is the necessity of air vents.” He tugged at the mesh and it began to come away from the wall, revealing a dark but narrow space beyond – a space just large enough to accommodate an unclothed woman.

“Phogg, Passepartout,” I hissed. “Give us a hand here.” The two men knelt down beside me and all four of us slid our fingers into the gap and pulled the mesh out of its meagre housing, tearing it clean away.

“Now, Mary,” said Holmes, “d’you think you can squeeze yourself into that hole?”

Mary sank to her knees beside me and peered under the bench. “I should think so, but what will I do when I’m in there?”

“That, I’m afraid,” said Holmes, “I can’t help you with. But I imagine the vents will lead to a central system from which the whole iceberg can be controlled.”

As she crouched there beside me, I couldn’t help noticing she was trembling. Whether from the cold or the desperate mess of our situation, I couldn’t tell, but I felt a warm glow growing in my belly. Then I realised I’d wet myself for a second time.

As Mary slid herself into the air vent, I wondered if we’d ever see each other again. Glancing at my companions, I saw the look of concern in all of their faces. Except for Passepartout, whose gaze was firmly fixed on Mary’s buttocks. I gave him a smack across the back of his head and he, eventually, had the good grace to avert his eyes.

When Mary had disappeared from sight, we all got to our feet. “What now, Holmes?” I said.

He shrugged. “Now, we place our trust in that amazing and wholly exceptional naked woman we know as Mrs Watson. And just hope she doesn’t fuck things up.”

Holmes lifted a hand to silence me. “Hark! Here that?”

We all dropped once more to our knees and strained to listen at the air vent. For a moment all we could hear was the chug-chug of the iceberg’s engines, then in some distant part of the vessel came a yell of consternation.

“What did he say?” I whispered.

Holmes looked at me. “Sounded like – There’s a naked woman in the air vent.”

Posted by colingarrow on March 1, 2018 in Detective Fiction

4 responses to “She Vent That-a-way…”