RSS
← The Undoing of Doctor Hirsch
Not Much of a Plan → 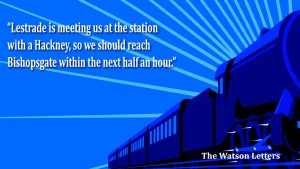 In setting down the final chapter in this bloody saga, I am gratified that I’m able to do so from the comfort of my own home. This evening, Mary kept me supplied with Custard Creams and hot chocolate while I revised my notes, reviewing and rewriting the sequence of events that led to the deaths of two of the protagonists. Now, she sits on the floor massaging my feet while I consider how best to relate the conclusion to this gory tale…

By the time we made our final rail connection on the last leg of our journey back to Londen, it was the afternoon of the following day. Inspector Schitt, not having brought a suit with him, was still clad in a dress, giving him the appearance of a rather miserable and wholly unconvincing female impersonator. His face reflected a sense of the annoyance he had revealed earlier, and a permanent scowl now lodged across his unshaven countenance.

Holmes, as usual, had reverted to his customary reluctance to share information, so we were no nearer to knowing exactly what had happened in his bedroom. Nevertheless, it didn’t take a genius to work out that while Holmes was at his toilet, Schitt had dressed up as some sort of pretend werewolf in a bid to scare us. If the man had not succumbed to the sleeping potion, Christ knows what he might have done – intentionally or otherwise. Presumably he’d employed the same tactic some days earlier in order to ‘attack’ Inspector Caddy on the moors for the benefit of the locals at The Slaughtered Lamb, giving credence to the werewolf rumours.

Since he could not have repeated this scenario a second time with the rest of us in the immediate vicinity, the truth of the matter had come from Caddy himself, who admitted that on the last occasion, the slashes to his neck were self-inflicted. Apparently, he’d borrowed one of Schitt’s knifey gloves and had unintentionally cut a little too deeply, which nevertheless served the purpose of, at least partly, convincing Holmes and I that some wolf-type beast had set upon him.

Even so, if we discovered that David Kessler was the real werewolf (and Holmes seemed convinced that this was the case), none of the Schitt/Caddy shenanigans really meant anything.

In an effort to avert further fisticuffs from the aforementioned pair, Holmes had seated himself between them, allowing exchanges of only stern glances and suitably insulting hand-signals. Mary and I sat opposite, taking turns trying to persuade Holmes to divulge his plans.

“I’ve told you, Watson,” said Holmes for the umpteenth time, “there is no specific plan other than to apprehend David Kessler.”

“You know my methods, Mary – the taking of another human life is not one of my usual solutions, though if it becomes the only viable option…” He tailed off, clearly not wanting to put into words what we were all thinking.

For my own part, I couldn’t see how keeping the fellow in some sort of confinement would be any different to taking his life, though as I was only too well aware, our old pal Doctor Lecter had not found any institution capable of permanently removing his liberty. That very morning, The Times had reported the famous cannibal’s latest bid for freedom. It seemed Lecter had beaten up two guards, hung one of them up on a meat hook and removed the other’s face in order to wear it as a mask, thus giving himself the perfect disguise. When the authorities whisked him off to hospital thinking he was a prison guard in the final throes of life, the canny doctor had overpowered his captors and escaped into the night.

It was hard to imagine Kessler being more adept at escape than Lecter, but it wouldn’t be the first time I’d been proved completely wrong.

I was aroused from my meanderings by the conductor, who announced that we would shortly be approaching King’s Cross.

“I suggest we stick together,” said Holmes, gathering his belongings. “Lestrade is meeting us at the station with a Hackney, so we should reach Bishopsgate within the next half an hour.”

Allowing our companions to leave the carriage first, I grasped Mary’s hand and urged her to stick by me at all costs – I didn’t want to be stitching her wounds if things turned nasty.

“Don’t worry, Johnny,” she said, “I’ll keep us safe.” And with that she produced a small repeating pistol from her handbag. “If he comes near me, I’ll blow his bloody brains out.”

I had to admire my wife’s courage – given what she’d been through, it was reassuring she hadn’t run screaming all the way back to Marlborough Hill. Checking my own weapon, I experienced a modicum of relief that my pistol was fully loaded and ready for action. My one concern lay in the old legend that werewolves could only be killed by a silver bullet. Though, truth be told, if it all came down to legends, we were all going to be well and truly buggered.

Posted by colingarrow on September 23, 2018 in Detective Fiction

← The Undoing of Doctor Hirsch
Not Much of a Plan →

2 responses to “Into the Fray…”