RSS
← A Bird at Breakfast
Through a Window →

Stranger on a Train 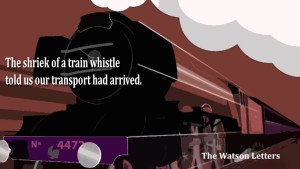 Diary of Doctor J. Watson
Aboard the Cumbrian Express

It was while I waited for the clerk to arrange our tickets at the station that I realised my mistake in assuming our nemesis would not be nearby. Mary and Penelope had retired to the waiting room armed with a tray of sandwiches, a pot of coffee and my revolver (the latter concealed in Mary’s handbag). Penelope too, had a handgun hidden about her person, just in case.

Keeping half an eye on their table through the adjoining door, I scanned the area for possible threats. At once, I spotted three dubious-looking men who might easily be on the side of the damned Claw. All three were plainly dressed, had swarthy or ruddy faces, and were seated at separate tables, drinking tea. This was not in itself unusual – it is a well-known fact that the English working man is rarely comfortable in the company of others and will often secrete himself away from the gaze of fellow workers in order to avoid the horror of being engaged in spontaneous conversation.

The chap nearest to me held a copy of The Times up to his face, but I discerned from his oscillating gaze that he was no more reading it than dancing a jig. From where I stood, I could see the newspaper was not a recent edition (the crossword had been completed and one corner of the broadsheet was torn off). Noting the fellow’s eyes had fixed firmly on Miss Pitstop’s chest, I quickly dismissed him as nothing more than a lustful hireling, utilising a day-old newspaper as a prop for eyeing up young women.

Turning my attention to the other two men, I immediately saw that one was roughly middle-aged, had a white stick at his side and a hand-written sign pinned to his jacket. The emblem declared the fellow to be a veteran of the Crimea who’d lost his sight in that terrible conflict. Clearly, a blind man was no threat to us.

Lastly, a tall chap with a shock of red hair had seated himself at the table next to Mary and Penelope. I was reminded of The Case of the Red-Haired League and for a moment found my mind drifting back to that lusty young chap whose fortune Holmes and I had recovered when we exposed a scheme to rob the poor lad of his savings. Perhaps it was for this reason that I dismissed this man too from my scrutiny.

At that point, a newcomer wearing a black Fedora and greatcoat entered the waiting room and immediately approached the women’s table.

“What’s that?” I exclaimed, turning back to face the ticket master.

“I said,” the little man repeated, raising his voice a little too gamely, “That’ll be…”

“Yes, yes, I heard you the first time,” I said, tossing the required coinage across the counter and grabbing the tickets from his outstretched hand.

Ignoring the man’s continuing commentary, I hurried into the waiting room to find the stranger standing with his back to me and speaking in low tones to Mary.

“Hold it right there,” I whispered in the man’s ear, “or I’ll blow your spine to smithereens.”

“I don’t reckon you’ll do a lot of damage with that finger, Doc,” said the man in front of me, “but you’re welcome to try.”

I recognised the familiar American drawl before he turned to face me, but it was his suggestive smirk that made my knees go weak. “Harry!” I gasped, hugging him like a long-lost brother. “What the deuce are you doing here?”

Harry Lime glanced around the room before urging me to sit down. Pulling up two chairs, he leaned in close. “Heard you were having a little trouble with an old pal of ours, so thought I’d drop by to lend a hand.”

“Sure do, Miss Penny, but let’s not tell the whole world about it just yet, eh?” He gave her a wink and patted her hand, then turning to me, whispered, “I guess you noticed the guy with the stick?”

“Johnny, Johnny,” he chided. “That there’s no more a blind man than a side of beef. Take a glance at him now and I’ll bet ya he’s staring right at us.”

As surreptitiously as possible, I made as if to look back at the ticket office and as my eyes drifted past the war veteran, I saw that he was looking straight at me.

The former blind man had dropped his eyes, so I took the opportunity to take a good look at him. Now of course I could see the all the clues as plain as day – being no more than forty years old, he couldn’t possibly have taken part in the Crimean War, and the hairline around his forehead showed the edge of an elasticated band of the type used to fasten hairpieces in place. No doubt the white stick leaning against his table was just another prop to aid his pathetic disguise.

“And just to prove it…” Harry stood up cautiously, making not the slightest sound. Then, taking two steps towards the other man, he deftly lifted the white stick from where it stood and passed it across to me. The man did not move, but started straight ahead, as a true blind man might, unaware of the theft.

Taking hold of the stick, I immediately realised that it was not constructed from wood as I’d have expected, but from some sort of painted metal. Twisting the handle, I was amazed when it came away in my hand, revealing the razor-sharp blade inside.

The shriek of a train whistle told us our transport had arrived.

“Come along,” said Harry, pulling us all to our feet. “You guys get aboard the train. I’ll make sure this joker stays exactly where he is.”

“Thank you, Harry, “I gushed, feeling a little overwhelmed. “What’d we do without you?”

“You can thank me when the Claw is in custody. For now, take this.” He pushed something into my hand and looking down I saw that it was a machine pistol – the latest American model.

A moment later, the three of us were climbing onto the train. Leaning out of the window as we chugged out of the station, I saw Harry pull back an arm in readiness to smash the blind man in the face, but before he could do so, the other two so-called working men had jumped up and grabbed Harry, throwing him back against the counter. A second later, they were running up the platform and clambering aboard the accelerating locomotive.

“We’ve got company,” I said, sliding the window closed.

Mary and Penelope exchanged glances, then reaching into their respective handbags, pulled out their weapons.

Posted by colingarrow on November 4, 2018 in Detective Fiction

← A Bird at Breakfast
Through a Window →

4 responses to “Stranger on a Train”