Invitation to a Murder 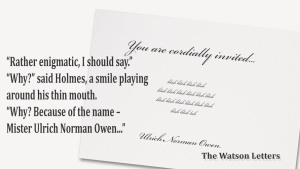 NB It has been some months since my last encounter with my friend and colleague Sherlock Holmes and even longer since we were involved in a case of any significance. Shortly after the adventure related in my story ‘Revenge of the Hooded Claw’, the Great Detective set off for Burma on the trail of arch-villain Dr Fu Manchu. Though I had urged him to allow me to accompany him, he was adamant I should remain in Londen with a view to ‘being my ears and eyes’ in his absence.

Initially, I interpreted this as a snub, and spent several weeks bemoaning the fact that my worth must be as relevant to him as a dead horse, since he rarely gave praise or complemented me on my intuition. However, after prompt replies to my weekly letters, I realised he did value my contributions but had considered my safety (and that of my wife’s) as paramount in his investigation.

Having dispatched my latest missive last Friday, I was somewhat surprised to receive a telegram from Holmes this morning summoning me to Baker Street. It seems he’d returned to the metropolis and wished to see me as a matter of some urgency.

Mrs Hudson caught me in a bear hug at the front door, then showed me upstairs with her usual eagerness, though all the while uttering remarks relating how that, in her tenant’s absence, I had simply ‘not bovvered’ with her, or considered that she might like ‘a bit ov male company ov a dark and dreary night’.

Issuing a few compliments on her appearance and the warmth of her welcome, I was heartened to see her wizened face light up once again. She left me at the door with the promise of heating up a trayful of muffins and a pot of hot chocolate.

“Ah, Watson,” said my companion as I entered the sitting room. “Glad you could make it.”

Holmes was seated in his usual armchair by the fire, and waving me into my former pew opposite, gestured to the corner of the room to which, until that moment, I had not paid any attention. Making myself comfortable, I looked over and for the first time discerned the figure of a man sitting in shadow. His hat was pulled over his eyes and a dark suit did nothing to illuminate his complexion.

Glancing at Holmes, I said, “A visitor?”

Holmes nodded and resting his elbows on the arms of his chair, steepled his fingers. “Doctor Watson, I should like you to meet a fellow medical man, Doctor Eddie Armstrong. In a moment I should be obliged if you would utilise your skills and examine him, but for now please take a look at this.” Reaching up to the mantelshelf, he took down a piece of white card and passed it across to me.

Holding the item between finger and thumb, I peered at it. “Postcard size, weight – perhaps two hundred or two hundred and fifty grams. Standard layout for an invitation. Printed by…” Turning it over, I saw the reverse side was blank. “No printer’s mark, which might suggest the sender doesn’t want anyone to know where it was produced.”

Holmes nodded. “Excellent. What else?”

“Well,” I said, “the wording is traditional – request the pleasure of your presence, etcetera etcetera. Sort of thing one might expect from a well-to-do house in relation to a ball, or some such.”

Holding the card up to the light, I detected no watermark or other signature. “Nothing, except…”

“Rather enigmatic, I should say.”

“Why?” said Holmes, a smile playing around his thin mouth.

“Why? Because of the name – Mister Ulrich Norman Owen. The first one, Ulrich, is German. Old High German I should think, then Norman, well that’s of English origin, possibly from Scottish or Gaelic derivation. And, Owen of course, is Welsh.” I passed the card back to him, feeling rather pleased with myself. “So this is an invitation from a German English Welshman.”

Holmes guffawed, but his features immediately slid back into his customary impassive gaze. He looked across at our visitor. “Which is exactly what Doctor Armstrong thought.”

The man in the corner coughed suddenly and whipping out a large handkerchief, covered his mouth. Even so, I couldn’t help noticing a few spots of blood appeared on the cream-coloured material.

“Yes, indeed,” said the Doctor. “But more importantly…” he coughed again. “More importantly, I’ve never heard of this fellow, or the place mentioned on the invitation.”

Posted by colingarrow on December 22, 2018 in Detective Fiction

← The Colonel’s Choice
The Game’s Afoot →

3 responses to “Invitation to a Murder”