RSS
← What Lies Beneath…
To the Island → 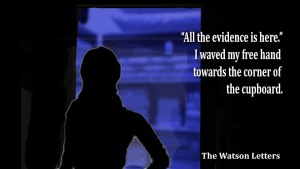 As I’d expected, the door opened into a store cupboard located directly beneath that portion of Mr Marston’s room where the chamber pot had originally been located. Sturdy shelves lined each wall, stowing linen, blankets and household cleaning products. A couple of cardboard boxes in the corner housed several rusty kitchen utensils including a bread knife. Evidently the proprietor was not a man to throw anything away, and this presumably extended to an unwillingness to squander profits on the latest dust-sucking devices. Instead, he relied on an old dustpan and brush and a variety of besoms and brooms, all of which had seen better days. (It also occurred to me that we had not seen our host since entering the inn the evening before. I made a mental note to mention this to Johnny later.)

“Ah-ha,” said the inspector, pointing up at the ceiling.

Aiming my lantern upwards, Johnny and I saw the object of his attention. The planking which created not only the roof of the store cupboard but formed the floor in Marston’s room, had been tampered with. In a well-maintained house, of course, a separate layer of boards would have been fitted underneath the ceiling. This was not a well-maintained house. However, the single layer of flooring would’ve allowed our culprit to generate a diversion that had initially fooled me.

“He must’ve climbed up the shelving and put ‘is eye to that gap in the boards,” observed Lestrade.

“He must, indeed,” said my husband.

I resisted rolling my eyes melodramatically and waited for one of them to suggest an alternative scenario, but the pair of dimwits simply stared up at the section of ceiling where someone had gouged away part of the wood, leaving an easily accessible hole which nevertheless would not have been visible from above, had we not been looking for it.

They both looked at me.

“What does this tell us?” I tried again.

Lestrade began to say something but whatever it was lost its motivation and petered out. John also opened his mouth but again, was unable to elucidate.

“Really,” I muttered. “You two are hopeless. Isn’t it obvious?”

“Oh come on, darling,” said Johnny, adopting a whinging tone that only succeeded in annoying me. “It may be obvious to you, but…” He shrugged.

Lestrade coughed. “Wiv all due respect Mary, we ‘ave established that the perpetrator could easily ‘ave put his eye to that hole to see into the room above.” He smiled as if this explanation solved the whole case.

“And what would he have seen?” I said, doing my best to sound interested.

“Well,” said he. “He’d ‘ave seen the er…into the er…well, the room itself.” He nodded at Johnny, but my husband had realised I was ahead of them both and dutifully kept quiet.

“All the evidence is here.” I waved my free hand towards the corner of the cupboard.

“What? A brush?” said Lestrade.

I sometimes wonder how the male of the species ever manages to get himself out of bed in the mornings, let alone achieve the miracle of procreation.

Striding to the corner, I picked up the broom and held it in front of them. “There’s a crack here in the end. D’you see?” They nodded. I picked up the knife and slotted the thin handle into the end of the broom. “And this?” Still they didn’t get it. I raised the device upwards towards the ceiling.

“My God, “said John. “He used it to poke through the gap and rattle the chamber pot.”

“Yes,” I said. “Though not so much a rattle, as a thump, thump, thump. Leading you and I to the conclusion that someone was engaged in –”

“Ah!” said the inspector, cutting off my description. “So after committing the crime and making those bloody footprints to throw us off the scent, he came down here to make a bit of a noise in order to create the effect that someone was doin…somefing untoward…in that room?”

We all looked at each other for a moment, then Johnny said, “Which means they must have been in here when you and I entered the bedroom and found Marston.”

“And then whoever that person was, simply joined in when the alarm was raised, eh?” said Lestrade.

“Which means the killer is someone in the house.”

I shook my head. “Not necessarily. Well, it’s hardly the Tower of Londen, is it? Anyone could have walked in here in the middle of the night.”

“No.” Now it was my husband’s turn to shake his head. “Holmes made it clear to me before we left – we mustn’t get distracted, because this case is all about the book. Whoever’s behind it must be one of our travelling companions, otherwise it makes no sense. Also,” he added, “in the book, Marston is the first one to be murdered.”

Lestrade gave a short laugh. “We’ll I don’t mind admitting, I ain’t goin to no island wiv you. If you two and Mr Holmes want to hang around til the bitter end, you’re welcome, but as far as I’m concerned, I don’t want to be around to hear the killer announce, ‘and then there were none’.”

I had to agree.

Posted by colingarrow on February 26, 2019 in Detective Fiction

← What Lies Beneath…
To the Island →

2 responses to “The Chamber Pot Explained”