RSS
← Doing it By the Book
And Then There Were Ten → 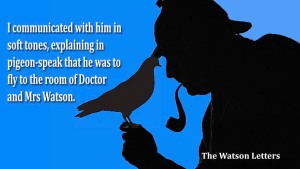 Utilising a pair of Mycroft’s patented super-strong spy glasses, I watched the proceedings from my burrow beneath the garden shed on the south side of the house. Unfortunately, my dear brother’s latest invention – a long-range listening device that depended on a clockwork mechanism for power – had developed a fault. The upshot of this meant I could only hear occasional phrases, interrupted by intermittent squeaks and whirring sounds from the headphones. Even so, I’d heard enough to know that Watson had made it clear to all and sundry (apart from the butler and his wife), that they were in danger, though how seriously they took this was hard to judge.

The guests were about to eat together for the first time, and I watched carefully as the butler served what I expected would be a cold soup of some description, followed by a ham salad. Curiously, none of the guests seemed keen to actually eat anything and after the butler’s departure, they all sat around looking at each other.

At this point, my hearing device gave up altogether, so I determined to get closer to the action. Packing my gadgets in my shoulder bag, I slid along the base of the hedge and round to the other side of the house where I knew the kitchen was located. Dressed in my patented Green-as-Grass-Lawn-Suit, I knew it would be almost impossible for anyone to spot me from the house, but nevertheless, I took the utmost care as I slid across the lawn to the kitchen window.

Rising slowly, I attached my headphones again and laid the patented Window-Trumpet attachment against the lowest pane of glass. Immediately, the butler’s voice echoed in my ears:

“I’m telling you, Ethel, they aren’t bloody eating a damn thing. Watched ‘em through the keyhole, I did, and they’re all just sitting there, like bleedin statues.”

The woman responded in a squeaky, high-pitched tone that put me in mind of Mrs Lestrade.

“Well, I’m doin’ me bleedin best, ain’t I, Tommy? Don’t know what they expect, anyway, what with the master not being here an’all to tell us what we’re supposed to be doin and that.”

At this, she burst into tears and her husband straightaway flew into a rage.

“Aw, for fuck’s sake, Ethel. Don’t you bleedin start wiv yer bleedin blubbering again – it’s more than a bloke can stand. An’ it’s not my bleedin fault the master and the missus ain’t here, is it? So just cut that out now, afore I give you summat to cry abaht.”

The woman ceased her snivelling, but a new sound came to my ears, informing me that someone else had come into the room. On hearing the newcomer’s dulcet tones, I couldn’t help but smile – it was my own dear Watson, no doubt hot on the trail of the killer.

“Ah, Rogers, and Mrs Rogers,” said he. “Hope you’ll forgive the intrusion into your particular domain, but we were wondering, that is, the other guests and myself were wondering, who prepares the meals.”

From the ensuing silence, I deduced that Rogers and his good lady were looking at each other, trying to work out what to say. Eventually, the butler coughed and said, “Well, sir, it is Mrs Rogers who prepares all the meals here, as we have been instructed so to do by the master.”

“You said earlier that he’s expected home this evening.”

Another silence and I could almost hear the cogs in my old friend’s brain clunking round as he considered his next question. Footsteps on the stone flags told me the good doctor had crossed to the window and was no doubt rubbing his chin thoughtfully. If he’d taken the trouble to slide the sash up and lean forward, he’d very likely have spotted me. But Watson is not a man of action, so he simply stood there, thinking.

“Then you know your master well?” he said, after a long pause.

There was a hesitation in the other man’s voice that suggested what he would say next might well be a lie.

“Of course, sir, Mister Owen and his wife took us on several months ago and have treated us very well.”

“Several months ago?” said Watson, in a tone that I recognised. He too had seen through the lie. “So you’d be able to describe them to me?”

The butler coughed. “No sir.”

“No. The master issued specific instructions regarding the guests and yourself and what we were to tell you and also…” he coughed. “And also what we are not to tell you.”

“You just said ‘the guests and yourself’, didn’t you?”

“So your master mentioned me by name – Doctor Watson?”

Even though my listening device was not of the utmost clarity, I quite clearly heard Watson’s sharp intake of breath. It was almost as loud as my own.

Watson made his excuses and left, and after a moment, I heard an object thrown across the room.

“They know,” the man muttered. “They bloody know!”

The butler’s wife must have endeavoured to comfort him, as their next words were muffled, perhaps by kisses and a close embrace.

“Jesus wept,” moaned Mrs Rogers. “We’ll be buggered if this comes out.”

“Buggered’s the word,” said her husband. Then his voice became stern and I discerned an angry edge to his tone as he said, “But you listen ‘ere, Ethel. Don’t you dare say a bleedin word about this, no matter what any of ‘em say. If they find out we’ve never met Owen, they’ll only ask more questions and then everything’ll come out.”

This last was of great interest and I determined to let Watson know. Slithering back to my burrow beneath the shed, I scribbled a short message on a scrap of paper, then sliding a hand into my poacher’s pocket, pulled out George, Inspector Lestrade’s prize carrier pigeon. Fastening the message to the bird’s leg, I communicated with him in soft tones, explaining in pigeon-speak that he was to fly to the room of Doctor and Mrs Watson. The creature nodded, though whether this was to show his understanding, or simply a pigeonic tic, I couldn’t possibly know.

As George flew off to his destination, I hoped Watson had remembered to leave birdseed on his window ledge.

Posted by colingarrow on April 13, 2019 in Detective Fiction

← Doing it By the Book
And Then There Were Ten →

2 responses to “The Window Watcher”