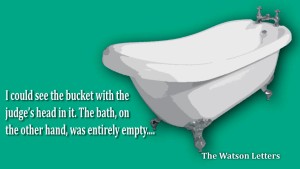 On seeing Vera Claymore hurrying towards the house, Holmes suggested I follow her while he went after Tommy Rogers. Giving the others an irritated glance (which I interpreted as annoyance at having to leave Messrs Blah, Lombardi and the General unguarded) he ran off in the direction of the icehouse.

Miss Claymore had already reached the French windows and slipped inside as I sprinted across the lawn, grateful I’d taken the precaution of kicking off my comfortable, but impractical, garden clogs a few minutes earlier. Bare footed and determined to apprehend my quarry, I nonetheless managed to trip over one of the deck chairs, wasting several precious seconds nursing an injured big toe.

Picking myself up, I raced into the morning room and thence into the hall, catching a glimpse of my prey running up the stairs brandishing a large kitchen knife. My God, I thought, she intends to kill Johnny! Tearing across the hall, I swung round onto the staircase and pelted upwards as fast as I was able. Above me the killer’s footsteps clattered over the landing and onto the upper staircase.

Where could she be going? Johnny had planned to conceal himself in our bedroom on the first floor, but Claymore was already nearing the second floor. Could she be searching for someone else?

“Mary!” hissed Johnny, hurrying towards me. “She’s got a knife. You stay here.”

“Not bloody likely,” said I, giving him a thump on the arm. “Come on.”

We hit the next staircase together, taking the steps two at a time. As we reached the top floor, Johnny pulled me to a halt. “Which one?”

A corridor stretched the length of the top floor, leading to two doors – one at either end. The first had a small brass sign attached pronouncing it to be the linen closet. It was also padlocked shut, so posed no danger as a possible hiding place. The other door had to be the entrance to the butler’s residence.

“The servants’ quarters,” I whispered. “There’s nowhere else she could have gone.”

Taking out his revolver, my hear husband stepped in front of me, holding his weapon firmly. Having left my own firearm in our bedroom, I rolled up the rug from the landing and held it up like a baton. It may not be sharp, I reasoned, but I’d be able to give the silly bitch a good wallop round the head if she came my way.

The door stood ajar. Johnny slid along the wall opposite and craned his neck. Can’t see her, he mouthed.

Skipping lightly across to the far side of the door, I signalled that we should rush in together on a count of three. Johnny nodded, so I held up one finger, then two then…

Miss Claymore shot through the door like a mad thing, hurtled past us and ran off towards the stairs. In the same instant her right foot slewed across the uncarpeted and highly-polished surface of the landing and she did what can only be described as an impromptu ballet move – one foot went forwards, the other went back and she did the splits, causing her womanly parts to hit the ground with a sharp slap.

With one hand clinging to the banister rail for support, Vera twisted round as if to fling the knife at us, but in throwing her arm back in readiness, she lost her grip on the deadly weapon, sending it spinning upwards in a rather graceful arc. The knife twirled in mid-air then as gravity took over, dropped like a stone down the stairwell. I was about to run to the woman’s aid (if only to chide her for being a silly cow), but Johnny grabbed my arm.

“Leave her – she’s lost the knife and, pardon me for gloating, won’t be going anywhere fast.” He turned towards the butler’s room and nodded. “Let’s go.”

As we moved carefully into the apartment, I couldn’t help wondering if, after all, there was someone else in the house we didn’t know about, in which case that same individual might at this very moment be waiting to… but no, Miss Claymore had to have come up here for a reason and as she had now left the room, whatever she’d intended must either have already been done, or failed in its execution for some other reason.

The bathroom door stood wide open and I was reminded that the body of Professor Klopp and the head of Justice Warmonger would still be where Johnny and Holmes had left them. From the doorway, I could see the bucket with the judge’s head in it, the bulging eyes gazing up at us with a slightly surprised expression. The bath, on the other hand, was entirely empty.

Johnny gritted his teeth and growled. “Bloody Vera,” he muttered. “Come on,” and we started back towards the landing.

Miss Claymore, while also not dead, was definitely in a lot of pain, which I freely admit to not feeling unhappy about. Her legs stuck out horizontally front and back, and she clung to the banister rail, mewing like a cat in heat.

She stopped her moaning, turned her face towards me and said in a horridly prissy voice, “I don’t know what you mean.”

At that point Johnny leaned over the banister rail to look down and let out a howl of anguish.

“Darling, what is it?” I said jumping up.

“Look,” he said, simply, pointing down the stairwell.

Leaning over the banister rail, I looked, and there below us was the body of Sherlock Holmes, flat on his back, the kitchen knife sticking out of his chest.

Posted by colingarrow on August 12, 2019 in Detective Fiction

2 responses to “The Empty Bath”