RSS
← A Detective in the Cupboard
The Pigeon Poisoner →

Caught in the Act 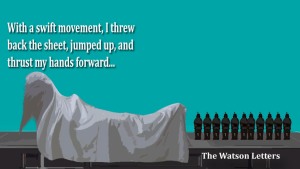 Beneath the bedsheet, the sounds of the house came to me in subtle, oddly-subdued ways. I heard the soft creak of the French windows in the drawing room followed by the familiar slap-slap of General MacArthur’s hob-nailed boots as he crossed the hall, the soft swish as his heels caught on the carpet, then a hesitant, halting step as the old man paused outside the dining room. I imagined I could feel his gaze on me and wondered what he might be thinking.

There was a deep, almost mournful sigh, a cough, then the footsteps retreated back into the hall and the slow clop, clop up the stairs.

More footsteps in the hall. This time there had been no creak at the French widows – had someone wedged them open? The step was light and quick, reminding me of the confident, swaggering gait of that infernal ice-cream seller, Mario, whose amorous attentions towards my dear Mary had almost brought us to blows. Suppressing a growl of anger, I forced myself to concentrate. The footsteps had stopped in the hall and there came a swishing noise as if the individual turned sharply on his heel. Two steps on the soft carpet followed, then receded back into the hall. Whoever it was, had changed his mind about gazing upon the body of Sherlock Holmes. Again, I discerned the clop, clop of footsteps up the stairs.

The next sound was unexpected. It was as if something, or someone, had disturbed the air in the room. I stared up at the bedsheet that covered my face, striving to see through the thin material, but there was only whiteness.

A soft breeze seemed to waft the sheet, and I wondered if someone had opened the window. But that was impossible – at the very least, I’d have heard the scrape of wood against wood as the sash was forced upwards. So that wasn’t it. But still this soft wind blew against the sheet, as if someone was blowing gently in my ear. What could it be?

A soft intake of breath, then, “Hallo, Dokter Vatson. I haf come to kill you.”

It was her! Professor Klopp! With a swift movement, I threw back the sheet, jumped up, and thrust my hands forward. Making contact with the villain’s face, I twisted my fingers, grinding the chilli sauce into her damned eyes.

In the same instant, Sherlock Holmes sprang out of the cupboard. “Ha!” he yelled. “Now we’ve got you. Klopp.”

“It seems not,” said I, sitting on the edge of the dining table.

Billy Blah had crumpled and sat on the floor, cross-legged like a naughty schoolboy. “What the hell was that for?” he whined. “Wasn’t going to do anyfing…”

“No, of course you weren’t,” said Holmes, his face creased in a snarl. Then leaning forward, he dug his hands into Blah’s jacket and pulled out a vegetable knife. “And you wouldn’t dream of stabbing Johnny through the heart?”

“No, I were just gonner…” He let out a loud sob and continued rubbing his eyes.

Mary and Lestrade appeared in the doorway.

Mary glanced at me. “Are you alright, Johnny?”

I nodded and turned back to our captive. “How did you know Holmes wasn’t dead,” I said, handing the man a handkerchief. “And that it was me on the table, not him?”

Blah sniffed and wiped the hankie across his face, blinking furiously. “It’s what she said.”

“Talk sense, man,” barked Holmes. “What did she say, exactly?”

Blah looked at the Great Detective, his lower lip trembling. “She told us what you would do.”

Holmes rolled his eyes. “Which bit of it?”

“All of it,” said Blah, blowing his nose on my handkerchief. “From when Dixie Dean first went to see you at Baker Street.”

At this, Holmes sank down and sat with a thump on the floor. “All of it? Every detail?”

Kneeling beside them, I took my handkerchief back and wiped the chilli sauce from my throbbing hands. “Dixie Dean was the fellow masquerading as Doctor Armstrong?”

I looked at Holmes and saw from his face that this was as much a blow to him as it was to me.

“I think, dear friends,” said Holmes, in a low voice, “that we have greatly underestimated Frau Klopp.” He poked a thin finger at Blah. “Where is she, Billy?”

The other man shook his head. “More’n me life’s worth, mate. Yer don’t know what she’d do.”

“I know what I shall do if you don’t tell us,” said Holmes.

“Don’t care,” he sobbed, looking up at Mary. “She ain’t a woman like what you are, Mrs Watson. She ain’t human.”

“Of course she’s human, you stupid man,” said Holmes. “Though I suspect she has more resources in her arsenal of skills than we could ever have imagined.”

Blah nodded sadly. “She ‘as. And you lot are gonner be bloody sorry by the time she’s finished.”

“Why, said Holmes, his voice almost inaudible. “What is she going to do?”

Billy looked at each of us in turn. “She’s going to kill yer. Kill all of yer. And it’s gonner hurt. A lot.”

Posted by colingarrow on August 25, 2019 in Detective Fiction

← A Detective in the Cupboard
The Pigeon Poisoner →