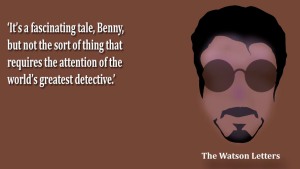 I must admit to feeling a little in awe of Ben Ravensburg. He’d lied about his employment at the museum, but knowing him to be an extraordinarily talented author, I saw no harm in giving him the benefit of the doubt. For some years, his books had scared me witless on many a long evening, waiting for Johnny to return from one of his night-time medical emergencies. Reading by lamplight in bed, I’d thrilled at the erotic delights of Ravensburg’s dashing heroes and the creepy apparitions they encountered. Sometimes I had to put down my book and give myself a little feminine pleasure to take my mind off the spooky goings-on.

Even so, listening to his tale, I wondered if his imagination had finally got the better of him.

Leaning forwards, Ravensburg stroked his goatee. “So, when I discovered my ancestor had been burned at the stake as a witch, I began to look into it.”

“And you say this woman—Sarah Ravensburg—was actually a wiccan?” said Holmes.

“That’s right. My research shows that many villagers recognised her as a healer. Some claimed she kept a sort of medical journal where she recorded her herbal remedies.”

Holmes opened his mouth, but I got my question in first. “And you think if you can find this book, it’ll clear her name?”

Ravensburg sat back in his chair. “It’s a long-shot, I know, but I believe it’s worth the effort.”

I looked at Johnny. He looked at Holmes. Holmes looked at the floor. Finally, the big-nosed detective raised his head.

“It’s a fascinating tale, Benny, but not the sort of thing that requires the attention of the world’s greatest detective. If this book exists, I’m sure any investigator with a reasonable level of deductive skill could locate it. Someone like Shaggy Rogers and that ridiculous hound of his would happily take on the case.”

“But that’s just it, Mr Holmes” said the Bearded One. “I’ve already enlisted the help of Shaggy and his friends.”

Ravensburg nodded. “Shaggy, Scooby, Velma, Daphne and Fred. They were exploring an old barn in the village one night and they vanished. Haven’t been seen since.”

This put a different complexion on the matter and after posing a few more questions, Holmes informed the famous author that he should catch the next train to Pokebottom-on-the-Moor, where we would join him later that day.

“Well,” said Holmes, when Ravensburg had gone. “What d’you think?”

Johnny shrugged. “Not entirely sure, Holmes. Seems odd he hasn’t called in the police.”

Holmes inclined his head towards me. “You think he may be hiding something?”

“Even Lestrade isn’t completely hopeless,” I said. “I think we’re being told only half the story…”

Johnny sighed. “If Ravensburg is hiding something, hadn’t we ought to know what it is before we get involved?”

Holmes ruminated on this for a moment, then his face brightened. “Watson—call the boy. I have two telegrams to send before we embark on this investigation.”

“If I’m right, this has very little to do with a group of missing amateur detectives and a lot to do with an ancient book that has a great deal more value than Ravensburg is letting on.”

As it turned out, Holmes’ theory proved right. But not in the way he expected.

Posted by colingarrow on December 19, 2020 in Detective Fiction

Another Night at the Museum 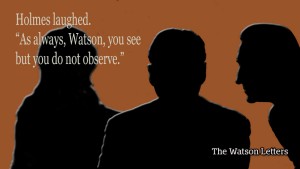 Diary of Doctor Watson
Half an hour later, swathed in linen bandages and with the addition of some makeup from Mary’s handbag, Ravensburg carried us one at a time into the gallery, placing us in suitable positions against the walls between the existing mummies.

Ravensburg checked the room again and whispered that he would respond immediately to calls for assistance, should the thieves appear. We had agreed he would inform the caretaker that the three of us had left, after which he intended to do the same, before surreptitiously making his way to the rear of the museum and slipping in via the cellar entrance, which had already been prepared.

Having only a narrow slit for my eyes, and with the gas lamps turned down low, the gallery took on a shadowy and menacing atmosphere. Standing between two decrepit former Egyptians gave me the willies and the urge to sing a happy tune to boost my flagging morale, almost got the better of me.

With no idea how long we might have to stand there, or indeed if the thieves would bother to return, I began counting.

On reaching four thousand one hundred and thirty-seven, I heard a sharp crack, followed by a distinct creak. Unable to turn my head without disturbing the bandages, I cast my eyes towards the door. Two dark shapes slid into the room. I heard a soft gasp from Mary as the thieves crossed the floor to a glass case exactly opposite where I stood.

“Don’t call me that, you dick,” said the second man, as he jemmied the lock on the cabinet.

The lock gave way with a snap and fell to the floor. As the taller of the two villains opened the case, I heard the distinctive tones of a certain consulting detective.

“I should leave that alone, if I were you.”

Holmes stepped forwards, ripping the bandages from his manly features.

Tearing off my own disguise, I hurried forwards to join Holmes, who had now produced his revolver. Taking out my own trusty weapon, I took up a position guarding the door.

The two men held up their hands. I couldn’t help noticing their faces resembled that of a well-known master criminal.

“Ah-ha,” said Ben Ravensburg, hurrying into the gallery. Holding up a lamp, he illuminated the villains’ ruddy complexions. “Who on earth…?”

Holmes stepped towards the taller man and reaching up, took a firm grip on his ear. Giving it a sharp tug, he pulled the man’s disguise free.

“Well, there’s something you don’t see very often,” he said, staring at the rubber mask. “Moriarty, if I’m not very much mistaken.”

“All the blokes are wearing them, these days,” said the man. “We’re great admirers of the Professor. Mwah, hah, hah.”

Approaching the smaller man, I removed his Moriarty mask, too. “Quite a good likeness, though,” I said.

Holmes turned to Ravensburg. “I suspect you might know these men, Doctor?”

“Indeed I do,” said the archivist, sneering. “Professors Solverson and Hoffart—here on loan from Oslo University Museum, supposedly researching Egyptian artefacts for the benefit of a new exhibition. But it seems the study of ancient treasures became too tempting to resist.”

“And we’d have got away with it too,” said the tall one, “if it hadn’t been for these pesky mummies.”

“But where were they hiding?” said I, peering round the gallery.

Holmes jerked his head at me and strode back out into the corridor. Pausing by the two wooden coffins, he waved a hand. “Open it, please John.”

With a little trepidation, I did as he asked, and pulled open the lid of the nearest sarcophagus. Inside, I found a paper bag containing sardine sandwiches and a jar of pickled herrings.

“That would explain the smell, then,” said Holmes, giving me a sardonic smile. “Part of the Norwegian diet?”

Having handed the villains over to the local constabulary, we set off back to Baker Street. Back at 221B, Holmes, Mary and myself tucked into an early breakfast, courtesy of Mrs Hudson.

“There’s something I still don’t understand,” I said, helping myself to another toasted crumpet.

I rubbed my chin, thoughtfully. “The whole thing appears to have been too…simple. Why didn’t Lestrade work out where they were hiding?”

Holmes laughed. “As always, Watson, you see but you do not observe.” He glanced at Mary. “Don’t you agree?”

Mary frowned. “There was definitely something funny about those two crooks.”

Holmes raised an eyebrow. “Such as…?”

Mary shrugged. “Their accents. For Norwegians, they sounded distinctly Cockney.”

“Due to the fact that neither have been any closer to Norway than West India Docks.”

“Former members of Moriarty’s gang, in fact. Bert Clacker and Nobby Nobbler. Lestrade would’ve recognised them straight way, which is why the police were not called in.”

“Ravensburg lied,” said Holmes. Reaching up to the mantelpiece for his meerschaum, he began to stuff it with rough shag. “I expect the rest of your questions will be answered shortly when our next case arrives.”

Holmes smiled sardonically. He cocked his head. “Hark. Footsteps on the stair…”

A moment later, a knock came at the door.

Holmes waved a hand at me. “Watson, would you do the honours, please?”

Crossing the room, I pulled the door open.

“Come in, sir, and take a pew,” said Holmes indicating an armchair.

The archivist settled himself, took a breath, and said, “I expect you’re wondering why I’m here.”

“Not at all,” said Holmes, winking at me. “Today is Saturday. You are not expected again at the museum until Monday. Between now and then, you had hoped to solve a mystery of your own.”

Ravensburg’s eyes widened. “How on earth..?”

Holmes smiled. “Before we trotted off to investigate your so-called Norwegian friends, I took the liberty of telegraphing an old acquaintance of mine. Lord Ballantyne. He’s a member of the board at the museum, you know.”

“It turns out you do not actually work for the museum. Rather, you are a volunteer, working on a research project of your own.”

“So,” said Holmes leaning towards our guest, “what I want to know is why you had us go through that ridiculous charade with Clacker and Nobbler?”

“Of course,” said Holmes. “After all I am the world’s greatest consulting detective.”

Ravensburg let out a long sigh. “Right. Well, it all started with this witch…”

Posted by colingarrow on December 10, 2020 in Detective Fiction